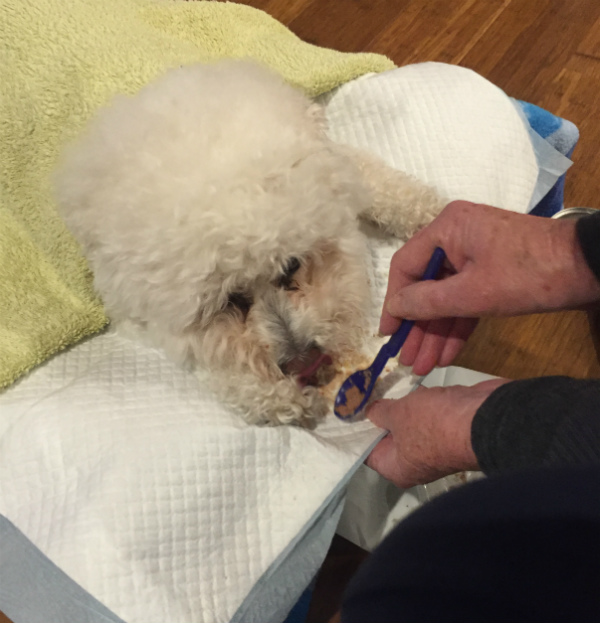 Rudy is an 8 year old Bischon Frise who lives with his owner (mum) and lucky to have ‘grandparents’ who adore him and ‘babysit’ him on weekdays.  Rudy has been coming to the Berwick Village Since a puppy, graduating Puppy Preschool in 2010.  Other than a sore knee he has been a picture of health, regularly vaccinated, protected from heartworm and de-wormed.

In August 2017, Rudy was brought to the clinic because he was finding it difficult to use his hind limbs.  He could still walk and his owners wondered if he had slipped on a friend’s polished floorboards.

Dr Jeremy noted that Rudy was not in pain; however he did have some mild weakness in his hind legs.  Otherwise Rudy was in good health and spirits.  He was booked in to return the very next day for some x-rays.

The next morning when Rudy returned, we were all shocked at the progression of his weakness.  Rudy could no longer stand, both his front and hind legs were now affected.  Jeremy was concerned about acute paralysis caused by ticks, spinal injury or diseases that attack the body causing paralysis.  What seemed like an ‘straightforward’ case yesterday suddenly became much more serious and time was of the essence to get Rudy the help needed.

The owners wanted only the best for Rudy, so gave Dr Jeremy the ok to complete x-rays and a blood test here at the clinic.  While these were underway, the nurses searched every inch of Rudy’s body looking for possible Paralysis ticks.  They can be very small and hard to find and can even be in the ear canal or on the gums, so the nurses repeated this process again and again.  When satisfied there were no ticks, the blood results and x-rays were ready for review

Fortunately there were no severe injuries to Rudy’s spine that were obvious on x-ray and his blood results were all normal. With the blood results and Rudy’s mental state being normal, diseases such as meningitis or botulism were now less likely.  Given the progression of the paralysis and knowing sometimes the respiratory (breathing) muscles can become paralysed, Dr Jeremy immediately referred Rudy to the Melbourne Vet Specialist Centre. The specialist vets said they would see Rudy immediately.  Rudy’s owners did not hesitate and took him straight to MVSC.

The main causes of progressive paralysis left to test for were Polyradiculoneuritis and Myaesthenia gravis.

MVSC tested for Myaesthenia gravis with a special drug and Rudy did not respond to the treatment, making this disease very unlikely. This had left the likely diagnoses of acute Polyradiculoneuritis.

Often while dogs with acute Polyradiculoneuritis can spontaneously improve within the first few weeks, it can take several months to see resolution of the paralysis.  It is suspected that the immune system is the cause of this disease but we really don’t know why Rudy has this disease.

One month after his initial diagnosis, Rudy was starting to try and lift his head, but otherwise he was paralysed.  He was not distressed and seemed to enjoy his trips to the vets, pats and attention.  He was kept comfy, warm, hydrated and loved being hand fed.

Dr Julia adjusted some exercises to include extending his joints so they did not stiffen or contract. She was also worried about muscle wastage as he had not moved for so long.

Six weeks after diagnosis, Rudy had learnt to toilet on command, if propped up on a 20cm children’s stool under his abdomen.  He would happily ‘stand’ there and toilet, absorb the suns rays and smell the roses.  While he showed no sign of getting movement back in his legs, we knew this could be a very long road to recovery.

So, now it was up to the owner and her parents to attend to Rudy’s needs as a paralysed patient.  Just like humans who cannot move, Rudy required turning in his bed at 4 hourly intervals so he didn’t lie on one side for too long.  He was carried outside to the toilet and held up so he could go.  Rudy needed help initially emptying his bladder as even this was paralysed, so he visited the clinic daily for this assistance.  Dr Julia gave his dedicated family a range of exercises for Rudy.  His family completed these movements with his limbs several times a day, every day.  He was brought food and water and had to be hand fed while held up in a sitting position, as he could not even lift his head or wag his tail.

Seven weeks after diagnosis was a turning point. Rudy was brought in by his amazingly dedicated owner one day and Rudy could wag his tail!  It was such a small thing, but also such a milestone!

He had some movement back in his body.  He could lift his head when lying down, and was even making attempts to try and roll up on to his chest.  He showed such happiness in being patted, talked too, and of course being hand fed. Now we could really see a light at the end of this…his wagging tail said it all.  Everyone celebrated included MVSC who followed Rudy’s condition closely.

A week after this Rudy had ever so slight tone in his legs; they were no longer completely floppy.  Time to build up those wasted muscles…so off to hydrotherapy at Dogs in Motion.
Rudy’s family built him his own frame so he could be supported in a standing position, with the frame supporting him.

Rudy has never been a fan of water, but loved the warm water of Hydrotherapy and started to use those legs more and more.  Each week he gained more strength.  He could sit up, stand for longer and longer periods of time and even get to his food bowl himself.

Nearly six months after diagnosis of Acute Polyridiculoneuritis, Rudy is nearly 100%.  He has weekly physiotherapy and has even had acupuncture.  He still struggles with getting up on slippery floorboards, but has new socks with rubber soles.  He is still dubious about his new fashion accessories. While no one can predict the onset of such a disease, Rudy was so lucky to have such a dedicated family who could tend to him 24/7 and never let him be alone.

His family’s unfaltering care of Rudy certainly made all the difference in this case.  The payback for them was having such a sweet and loving dog still in their lives.

After everything Rudy has been through Rudy still expects to be hand fed….