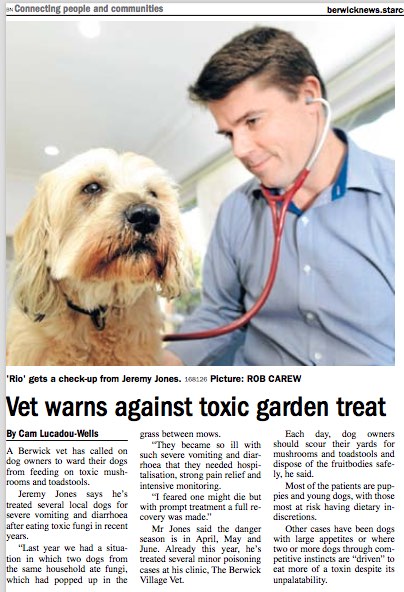 A Berwick vet has called on dog owners to ward their dogs from feeding on toxic mush- rooms and toadstools.

“Last year we had a situation in which two dogs from the same household ate fungi, which had popped up in the grass between mows.
“They became so ill with such severe vomiting and diarrhoea that they needed hospitalisation, strong pain relief and intensive monitoring.

“I feared one might die but with prompt treatment a full recovery was made.”

Mr Jones said the danger season is in April, May and June. Already this year, he’s treated several minor poisoning cases at his clinic, The Berwick Village Vet.

Each day, dog owners should scour their yards for mushrooms and toadstools and dispose of the fruitbodies safely, he said.

Most of the patients are puppies and young dogs, with those most at risk having dietary in- discretions. Other cases have been dogs with large appetites or where two or more dogs through competitive instincts are “driven” to eat more of a toxin despite its unpalatability. 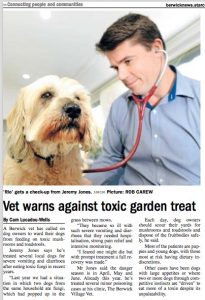 ← So what did we Eat? Mobility Mystery for Rudy →